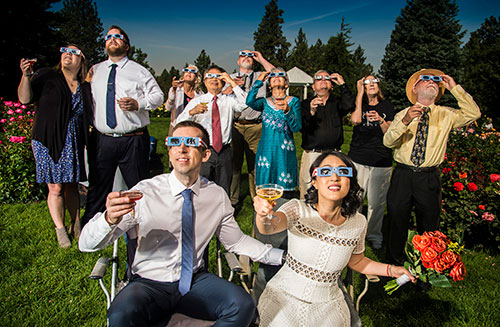 I had a last-minute assignment to photograph a solar eclipse wedding as an assignment for the newspaper I work at. The couple, from Hong Kong, decided to get married shortly before the moon covered the sun. My go-to lighting kit is three Godox strobes and a 26- inch Westcott Rapidbox beauty dish. As the sun was nearing the point of partial eclipse, the couple’s wedding photographer had them and the party toast the moment. I quickly set up my Godox AD200 strobe with the Rapidbox camera left–about six feet up on a stand with the diffusion cover off. I then quickly set up two Goxdox 860II speed-lights behind the group camera left and right just out of frame. With these, I placed Magmod grids and warming filters on the strobes to add a bit of warmth to the scene. I shot the all the strobes in TTL (through the lens) metering mode with an Godox X1N trigger on-camera. The TTL worked great for the test exposures. The wedding photographer decided to lay on the ground for his shot. After he was finished, I jumped in and shot at a higher view with my Nikon 24-120mm f/4 for the above photograph. The settings were 160th of a Sec., ISO 100 at f/5.

The photo ran on the Associated Press wire and was used in publications all over the world, including Time magazine, CNN and The Guardian.

I am trying to incorporate more off-camera flash into my everyday newspaper assignments. It is such a great training ground for using OFC. I want push my boundaries of my lighting abilities and see what I can come up with.  If you have any question, hit me up in the comments below.